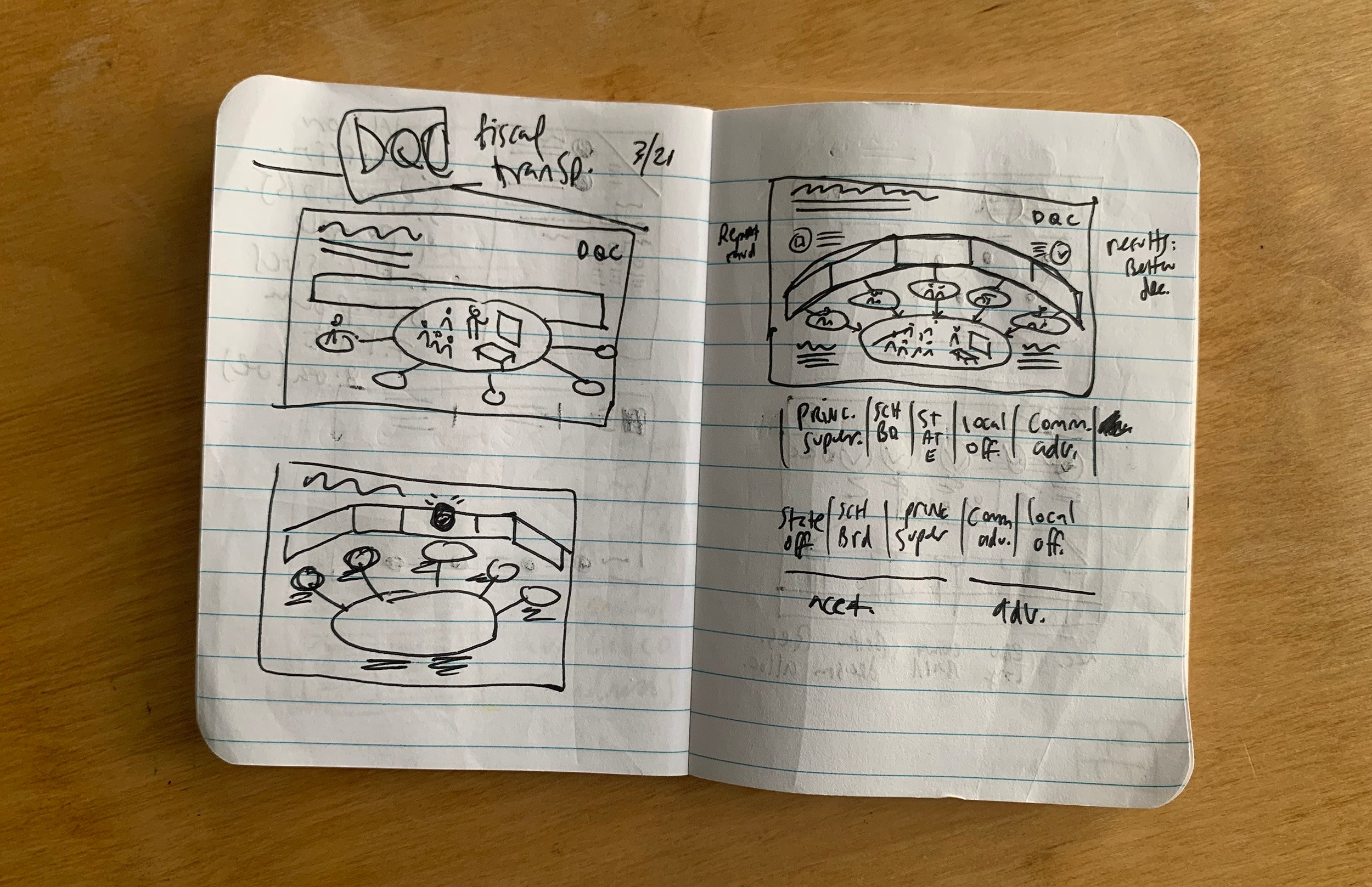 Why Start with Napkin Sketches?

The blank page is both opportunity and agony. It is an empty canvas to be filled with ideas. It is a barren wasteland, taunting us with its emptiness. The page itself is not to blame, and can’t do anything to help release our ideas except to be there, ready.

This is why starting with the roughest of ideas, the quintessential Napkin sketch, is the best way to begin.

It is said that Southwest Airlines began with a napkin sketch. Like many origin stories, it may be apocryphal, or at least exaggerated. But it represents the core idea: you can quickly outline the broad strokes of a big story in a small but useful picture. Then you can do it again, and again, and again with several more sketches until you land on the best one. The napkin is the beginning of the solution.

For designers—actually, for anyone… because Napkin sketches don’t necessarily require deep artistic talent—sketching is an extension of thinking. It’s a necessary step in getting the picture in your head out into the world. So draw early, and draw often, draw quickly.

“When you show napkins to a client it helps to give them a few options. It’s like looking at the same thing from different perspectives. So rather than having a conversation about a single image, you should compare and contrast diverse sketches in order to have a more meaningful dialogue. A range of options will help hone in on what works and what doesn’t.

To facilitate this dialogue you should point out the pros and cons of the different options. Usually there’s a tradeoff involved. E.g., Options A & B really highlight the client focus, but the process looks a bit less streamlined than Option C. Sharing the tradeoffs involved helps clients decide what features are most important so they can make an informed decision.”

—Ted May, Senior Designer at Tremendousness

Napkin sketches are good for fast iterations. Did you mess it up? Toss it and do another. Was it almost right? Adjust it and move on. Need a quick jam session with someone to jump start things? Draw together. Still not quite there? Just keep drawing more.

From a client perspective, Napkin sketches scream “work-in-progress”. They help keep people opening rather than closing, adding on instead of shutting down, collaborating versus cocooning. And because all that’s there are the bare bones, no one can be distracted by color, brand, fonts, details, or the idea of perfection.

That said, some people simply can’t deal with Napkin sketches. They are too high level, too abstract, or simply too messy and sketchy to take seriously. Some clients need more detail to be able to react to an idea. That’s OK, because that’s what the Blueprint is for. But for you, a designer or collaborator in the early stages of a project, napkins are how you get clarity and feedback. Of course, sometimes it’s smart for Napkins to be cleaned up for sharing with others, to make them more detailed and understandable.

“In the heat of the creative moment, when brainstorming in a group, or any time you’re just starting to explore options, super-rough Napkins are great. They facilitate rapid iteration, capture ideas so they’re not lost, and enable people to make their thoughts visible to others. But when the first deliverable to a client is also a “Napkin” sketch, it needs to have more detail so that its content, and that content’s purpose is clear. That means that, to me, there really are two kinds of Napkins—the exploratory, or the super-rough, and the explanatory, or the more detailed.”

The examples above show some of my personal “Napkin” sketches for a recent Data Quality Campaign project, along with one of the much more detailed “Napkin” sketch delivery documents I created for the client. The scribbled top-right of the left image became the detailed sketch at right.

To be completely honest, I used to think all Napkins should be exceedingly high-level because they represented the first glimmer of a potential solution. I’ve come to realize that that’s only helpful to me as part of my process of exploring possibilities and that clients and collaborators usually need another layer of detail for the napkin to truly make sense on its own.

I’m really not the greatest sketcher; I’m stronger on the design side. For me, a house might be just a square with a triangle on top. A person might simply be a circle over an upside-down U shape. Maybe a line makes up a nose so you can show direction or focus. And that’s all just fine—ask Dan Roam! It’s the visual itself and not necessarily the quality of the visual that is important. 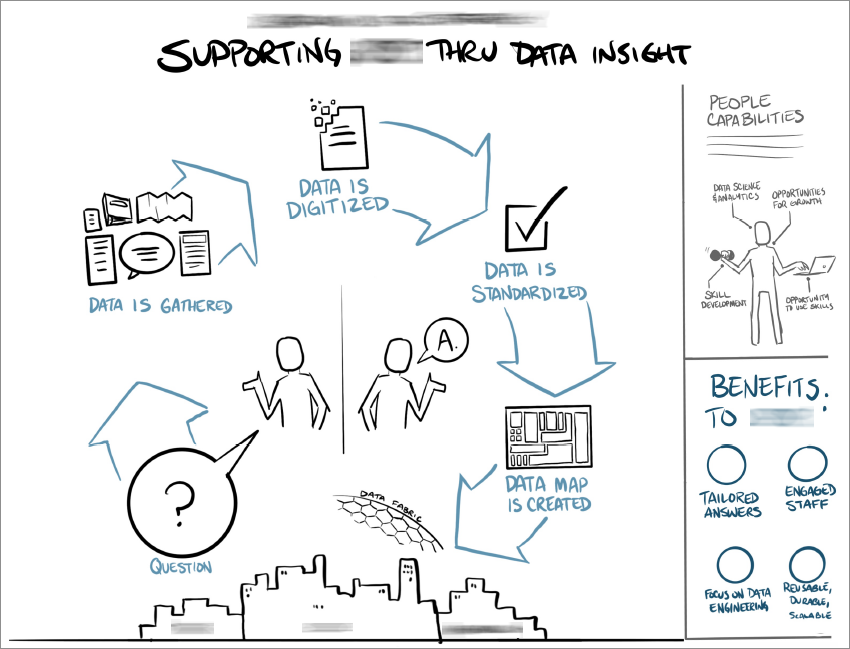 “The key is to start by listing what the big chunks of content are that need to appear on the page. I do this as a word list. It’s also important to work small at first, at almost a thumbnail size. It forces you to work in broad strokes which keeps your initial focus away from detail. And, you can get a sense of the overall shape and flow of the design before you add the detail. A successful example of this was when a key stakeholder showed up late to the Napkin review call, but was able to walk themselves through the sketch on their own.”

Like Blueprints, Napkins reflect the hand of the artist. Some are really rough: barely scribbles. This can be fine for personal use but not always helpful for clients. Some are works of art: effortless beauty with just a few flicks of the wrist. Most are in-between: quick, coherent sketches that convey the key elements, flow, and structure of the infographic to come.

Text placement or rough amount of copy can be conveyed with squiggle lines. But do know that Napkin sketches can have actual text labels. The combination of pictures + words is almost always more powerful and clear than either alone, and is especially helpful when the visuals are still in an embryonic state.

The point is that Napkin sketches can be rough enough that anyone can draw them. Or they can be beautiful scribbles from the hand of a skilled artist. Regardless, whether these ideas are captured on a whiteboard, a scrap paper, in a notebook, or literally on the back of a napkin… they facilitate not just the sharing of ideas but the act of ideation itself.