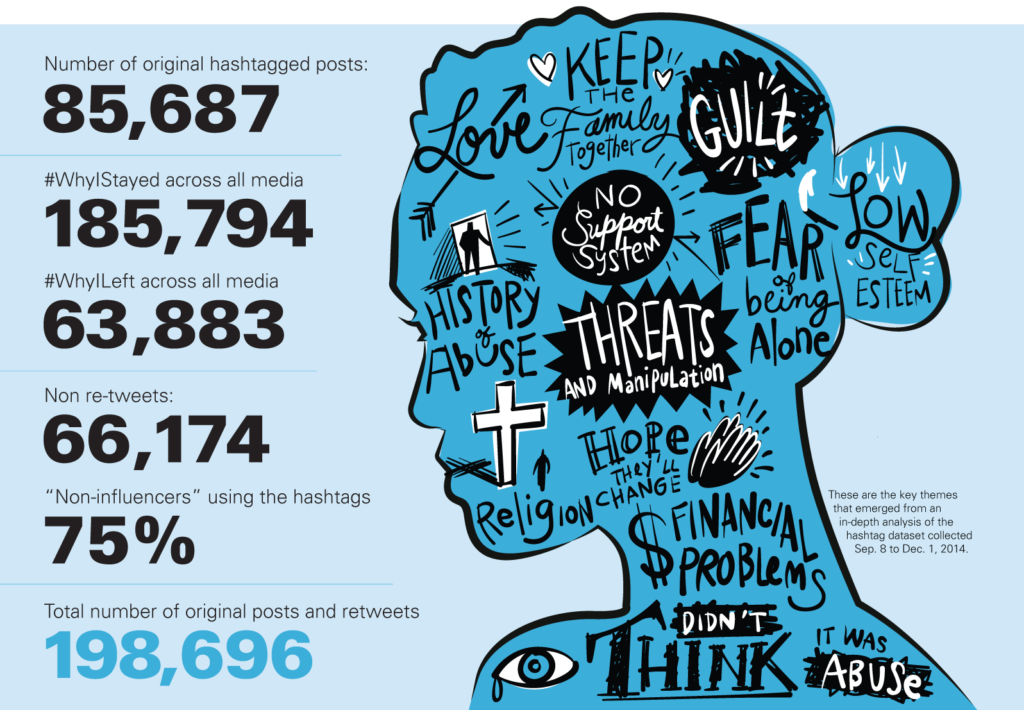 It was one year ago today that TMZ published the now infamous “Ray Rice elevator video” in which when the world witnessed the tragic images of professional football player Ray Rice abusing his then-fiancée in an elevator at an Atlantic City hotel. Though horrific to watch, there was one unintended positive consequence: it got people talking about domestic violence, especially on Twitter. Yet in addition to voicing outrage at the incident, many Twitter users had the same question about Rice’s fiancee: “Why didn’t she just leave?”

In response to this criticism of the victim, a survivor of domestic abuse, Beverly Gooden, shared her story of why she stayed in an abusive relationship. Soon after, more and more women began to share their own stories on Twitter under the hashtag, #WhyIStayed. As the conversation proliferated, more survivors came forward with their stories of leaving their abusers, and another hashtag was created: #WhyILeft. The posts quickly became the #1 trending topic on Twitter in the United States.

Based on the scale of the viral #WhyIStayed #WhyILeft Twitter conversations, the event represents a milestone in domestic violence history, as thousands of abuse survivors came forward independently on social media to tell their stories.

To commemorate this anniversary, Tremendousness has teamed up with Big Mountain Data—an organization focused on data-driven solutions to help in the fight against family abuse and violence—for the release of new insights into the impact of domestic violence on women, including why many stay in abusive relationships and why they ultimately leave.

Susan Scrupski, founder of Big Mountain Data, commented, “The number of women who bravely came forward to tell their authentic stories of abuse and their reasons for staying or leaving brought the topic of domestic violence front and center, highlighting the pervasiveness of the problem in our society.”

Big Mountain Data recognized the importance of this Twitter phenomenon as a turning point in the public conversation on domestic violence. The organization aggregated the activity over the period September 8 to December 1, 2014, to reveal the scale and magnitude of the survivor voices who came forward. The conversation spiked on September 9 with 77,544 tweets in one day. With 85,687 original hashtagged posts and mentions, and nearly 185,794 posts and retweets for #WhyIStayed and 63,883 posts and retweets for #WhyILeft, the results provide a glimpse into the complexity and scale of intimate partner violence. Most importantly, the fast-paced, viral exchange empowered survivors to come forward en masse from out of the shadows of an abusive past. Survivors found refuge and resolve in the community that grew organically with each subsequent tweet and media mention.

“Our goal is to leverage the power of big data analysis in the fight against domestic abuse,” said Scrupski. “Transparency is the antidote to a social epidemic that thrives on secrecy. In the magnitude of the response, women displaced their shame with a moral obligation to educate the public about the realities of living with an abusive partner.”

“As designers, our goal is to create clarity and impact,” added Scott Goldstein, a co-founder of Tremendousness. “We’re proud to have collaborated on this project. Domestic violence and family abuse is an important issue and the survivors who shared their stories deserve our continued attention and support.”

Big Mountain Data has presented the findings of this analysis in an infographic and a detailed presentation. The company will also offer the data on its open data platform hosted by Socrata, enabling researchers to conduct their own in-depth analysis on this important subject.

Here’s a link to the full PDF of the infographic.