Okay, imagine you were tasked with directing the biggest blockbuster of 2016, Batman v Superman: Dawn of Justice. Then you got to this point in the script.

What takes up two words in a script results in a scene that spans 12 minutes, impacts hundreds of staff, and kicks off a multitude of decisions. Decisions that will, at times, cost millions of dollars. How do you even begin to consider the scope of such a scene?

Similarly, organizations with big ideas also must find ways to wrap their heads around projects that can affect huge numbers of staff, require decisions up and down the org chart, and cost lots of money.

So what can you do?

You can start with a storyboard.

What is a storyboard?

Basically, it’s a sequence of drawings depicting the action of a scene alongside written descriptions and dialog. It’s a lot like a comic book, and you could even consider them the lowest-cost version of the movie. All that’s required is paper and a pencil.

With a storyboard the film director can experiment with pacing, tone, visual dynamics, and story—all without ever setting up a camera. It’s a low-stakes environment for finding the best way to tell the story. Something isn’t working? No problem, just erase it and start over. You wasted about 2¢ as opposed to $2M, and you and your entire crew know exactly how and when Batman needs to duck when Superman comes zooming toward him at Mach 2.

How are they used?

Storyboards are great at taking a big idea and making it digestible. That’s why they’re often used when mapping out movies and videos.

They are in that rarest of categories where both the process of creation and its result are valuable in different ways.

As a creative effort, storyboards encourage you to imagine scenarios to their fullest, and to consider all the people, places, parts, and possibilities that might go into those scenarios. They help aid in the exercise of broad ideation as well as identify the most minute points of specificity.

With a storyboard you can:

And on top of that, your finished storyboard can act as a North Star going forward.

“Why did we decide to do it this way?” Check the storyboard.

“Who has accountability for this phase?” Look at the storyboard.

“How do we think the customer will respond to this communication?” Storyboard.

A good storyboard is a cohesive visual narrative that everyone can see and reference. It eliminates ambiguity by demanding a level of specificity that generates confidence in ideas, activities, and things that might not yet exist. Check out the example below of a storyboard created to outline the customer-friendly repair process created for DISHR, a fictitious company. 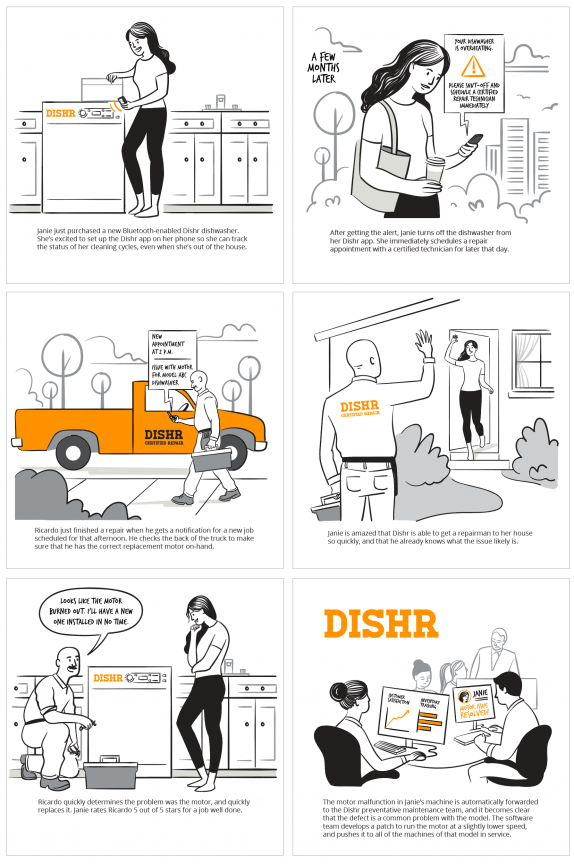 How do I make one?

So you’re probably not directing Batman v Superman: Dawn of Justice, but you likely have tasks, projects, or ideas that are broad in scope and require you to get a sense of the full picture before proceeding.

If your storyboard is more a means of mapping out information, you can keep things analog and create it with sticky notes, paper, and markers.

Before you start drawing, it’s a good idea to define the story you’re telling. Answer the questions below and keep them at hand while you build your storyboard:

On a wall or desktop (ideally, somewhere with a good amount of space) stick the two notes far apart from one another. Now start filling in steps that get you from the first scene to the final scene.

Keep a few things in mind:

Generate ideas until you feel you’ve gotten the level of detail that satisfies the criteria set by the two questions you answered earlier.

Now the fun part, grab another stack of sticky notes and draw each scene you’ve described. By the way, your drawings don’t have to be museum-worthy. Any visual that gets your point across will suffice. And labels on your drawings are not out of bounds.

As you approach each scene, think about who should appear in the scene and what actions are occurring. To capture what’s being said in a scene, grab another sticky note and draw a speech or thought bubble, write the dialog, and stick it above the scene.

After you’re finished drawing, take a step back and read through your storyboard. Look for steps you may have missed or scenes that seem out of place. You may also find you want to reorganize some of the steps. That’s what makes sticky notes a great tool for storyboarding. It’s easy to move things around if the order isn’t working.

At this point, you probably have a perfectly suitable storyboard. You can snap some photos of the sticky notes and assemble them into a slide deck or PDF. Or, if you want to take them further, transfer them to a storyboard template (again, you can find plenty of them online) and redraw your panels. And if you don’t consider yourself an artist, you can always hire one to reproduce (or create) your panels for you. Here at Tremendousness, we create both experiential storyboards to imagine future products and services, as well as video storyboards that outline our animated videos. Above is an example of a storyboard we created for animation. And here’s a link to the final product on CBRE’s site: {{cta(‘63837b41-2f2b-4e5f-939c-668314c38841’)}} .

From big to small

Moving from conceptual ideas to reality is one of the harder things to do in any professional setting. It’s easy enough to describe a desired outcome but finding the path to it is a challenge.

The strength of storyboarding lies in using visual storytelling to break big ideas into distinct, actionable pieces. It’s one tool, among many, that can take your ideas from concept to reality.