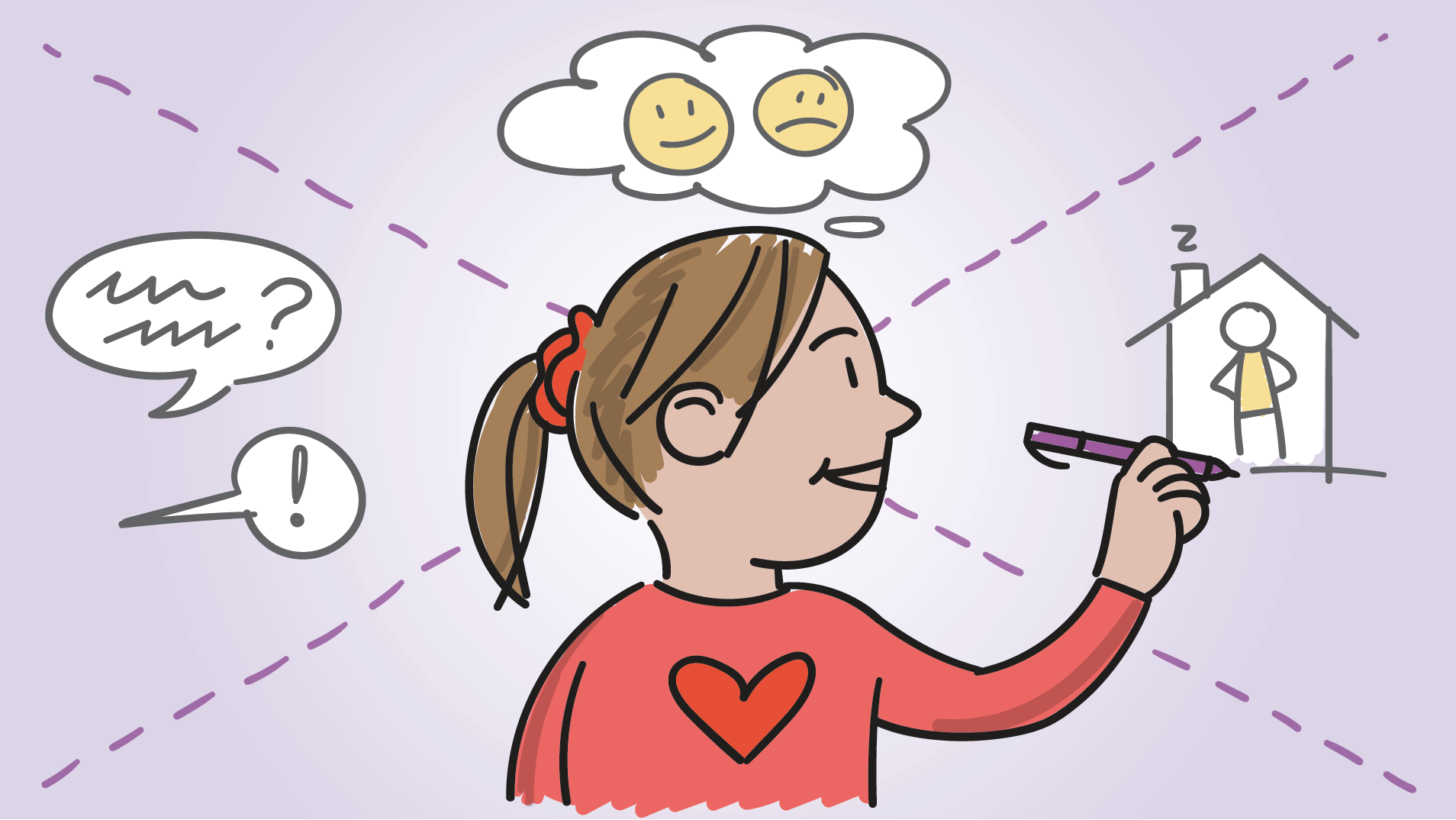 How to talk to your kids using visual frameworks

When I started working on this post a couple months ago, the full impact of the COVID-19 pandemic hadn’t yet spread around world.

I had started writing about using drawing and visuals as a fun way to kickstart meaningful conversations with your kids. And even though this was before quarantining, social distancing, and remote schooling started up, I think the methods here are even more relevant now than they were then.

With the current environment of kids around the world doing schoolwork remotely, not being able to visit friends, and just the general anxiety around staying safe, it seems even more essential than ever to stay in touch with how children are feeling about things. What follows is one particular visual experiment we did. I hope you find it useful.

It’s not always easy to have dialogue with kids about important stuff. Talking about their current favorite app or YouTuber? Easy. Discussing how they feel about school? Eh. We found ourselves in that position recently. My child is getting close to moving on from grade school so we’ve been having some discussion about how she’s currently feeling and how we manage the transition. And what kid wouldn’t jump at the opportunity to delve into that, right?

One persistent parental challenge I’ve found is having these kind of frank talks—and it’s become even harder with the stress everyone is under. You’ve got important stuff to say, but you don’t want to come across as if you’re yelling or lecturing. Which, let’s be honest, will most likely be their expectation if you walk in saying, “Heyyy, can we talk for a sec?” To have a meaningful conversation, both sides have to participate. But it can be like a minefield trying to get beyond the groans, eyerolls and stonewalling.

On the other hand, it’s usually not difficult to get kids to sit down and draw. There’s generally a dropoff around middle school, but most grade school kids are pretty comfortable drawing. And if the time kids spends perfecting their online avatars is any indication, it’s also not hard to get them to express their personality visually. So if you can easily get kids to draw and express themselves, it should be easy to encourage them to open up a bit on paper. If it’s a game it might actually be fun.

Any parent knows, there’s a lot more going on in a kid’s head than they usually let on. This could be a kind of drawbridge (pardon the pun) to that inner world. I decided to try one of our client discovery frameworks as our conversation starter. I’ll admit, I did expect a bit of resistance doing this. But I got her to play along by saying I was doing a weird experiment for work that I needed her help on. Which wasn’t not the case.

What follows are instructions for how to do the exercise along with my own field notes from the experiment. 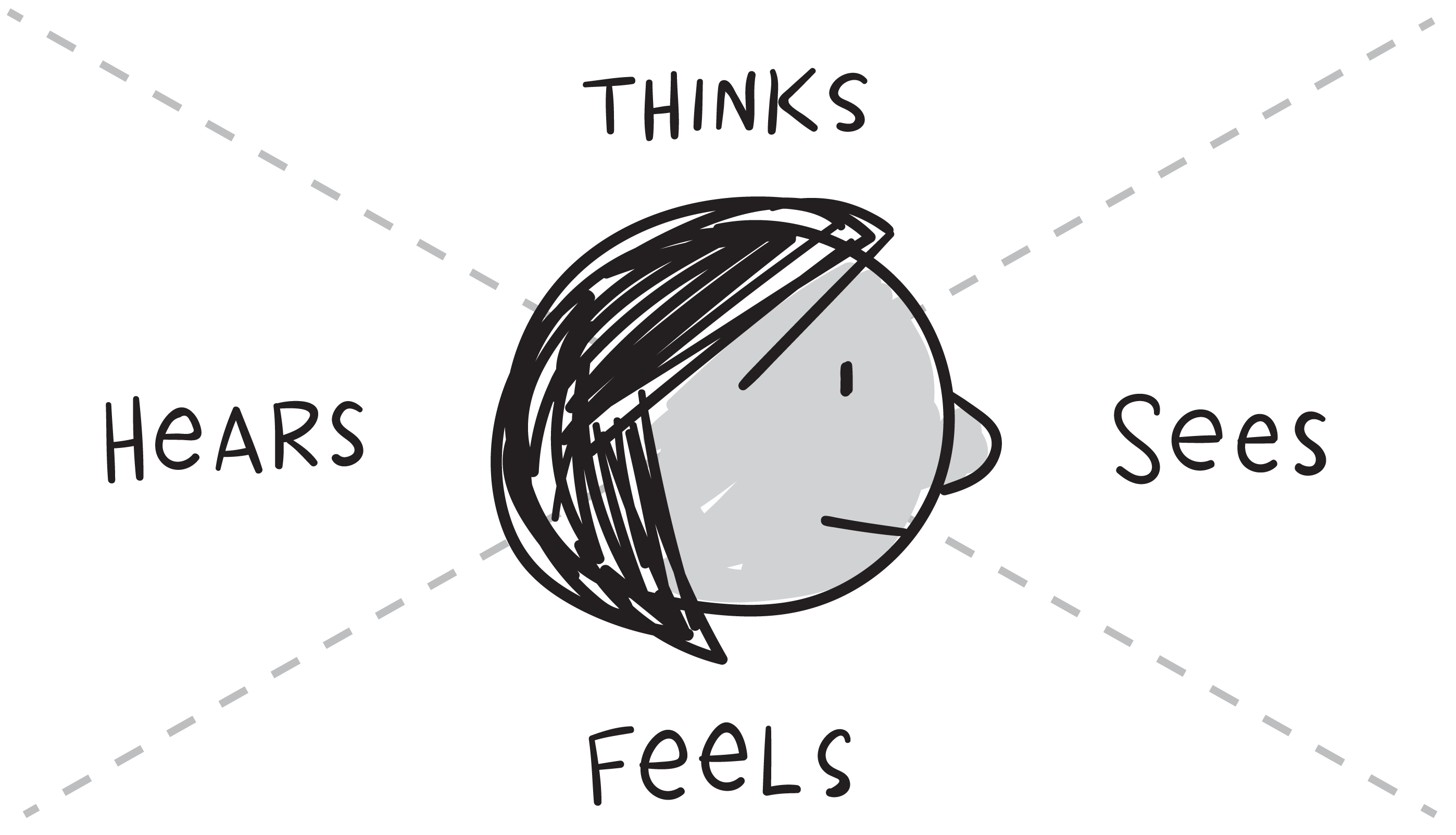 How to do Empathy Mapping

This visual framework helps get inside someone’s experience; it can give a peek inside their mind.

First, draw a circle in the middle of a sheet of paper.

Ask the person to draw themselves using the circle as a face. Anything is fine as long as it represents “me.”

Once they’re finished, clockwise from the top along the four edges of the page, write Thinking, Seeing, Feeling, Hearing. Then draw dotted lines to divide the four sections.

Ask them, using words and pictures in each of the four sections, to express how they feel about whatever topic it is you’d like to focus on: isolation, school, health, soccer practice, etc. What they write can be positive, negative, or simply descriptive.

Once all areas are filled in with at least one thought, have them walk you through it. That’s it!

How the experiment went

Kicking off the game by asking her to draw herself worked really well; she simply straight got to work because it focused her attention right off the bat. When adults are given a task like this, there’s usually hesitation: “should it look like me? am I facing forward or sideways? is it okay to draw outside the circle? but I can’t draw!” My kid was off to the races the minute I said, “Draw yourself here.”

I added the “Thinking, Seeing, etc.” labels after she drew the face. It feels more spontaneous and collaborative that way and not so much like a form she had to fill out. Our focus here was her experience in the school classroom (this was before all the schools closed).

Once she was done drawing, I asked her to walk me through it. The point was to express as much as possible, so it was important that she share her thinking rather than me just reading what she wrote. I asked some clarifying questions and she filled in the drawing a little more as we talked. And after that, she spontaneously launched into some funny classroom anecdotes.

In the map we ended up with, there may be a bit of exaggeration here and there. I’m not sharing her drawing here because this was all about her opening up and sharing her feelings with me, not you. Just know that for kids, some editorial cartooning can quickly reveal stuff that might be difficult to share otherwise.

For sitting down and spending 15 minutes on a little drawing exercise, I’d say she painted a pretty decent picture of her school life for me. The whole point was to kick off a conversation in a somewhat indirect way, one that allowed her to shed light on some of her feelings and experiences without feeling judged, and honestly it worked pretty well.

And I think it could help many parents out there, in these uncertain times and beyond.

Illustrations by Ted May and W. Scott Matthews / Tremendousness.