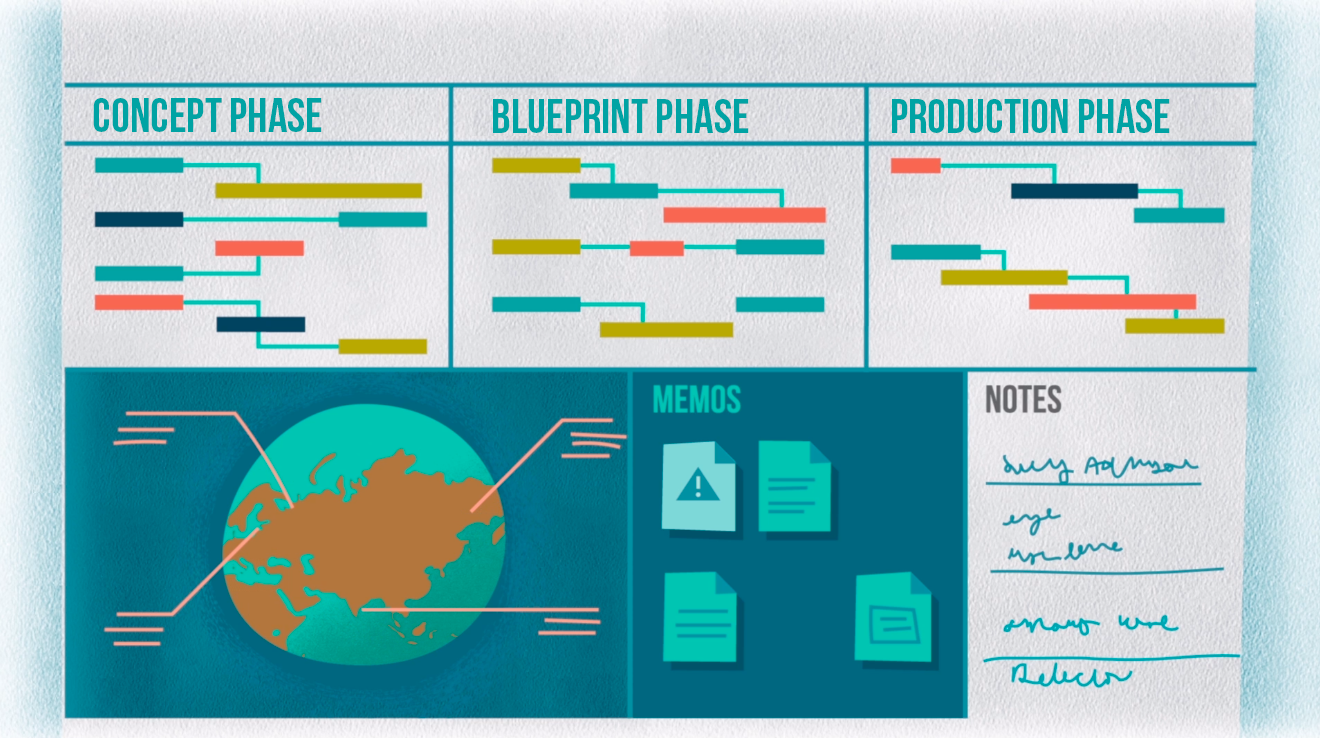 Part 1 of 2 — At Tremendousness, we call the final “making of the thing” the Production phase. That thing might be an infographic—maybe a poster to hang on the wall, maybe a PDF for digital sharing, maybe a scrolling infographic formatted for a blog, or maybe something for the spread of a magazine or a sales toolkit.

Of course, it might be more than a static image. Maybe it’s an animated video. Or a PowerPoint. Or a customer experience storyboard. Or any of the other of deliverables we offer. Whatever the case, they all have one thing in common: they are the actual thing we deliver to our clients, making them the last step in our core visual storytelling creative process. That process began with Discovery (for example, an in-person session or an online meeting), moved into the Concept phase, then the Blueprint phase, and ultimately closes out with this Production phase.

The much longer version: Production. Yes, it is many, many things. Here’s a very long but nowhere near comprehensive overview of the kinds of things that happen or need to be addressed during Production. Each of these subheads could, in fact, be a blog post of their own.

First things first. It’s imperative to have full and final client approval before moving to Production, especially if there are multiple stakeholders. Sure, some little things can remain TBD—but almost anything could cause time and effort to be wasted if last-minute changes cascade out of control. Consolidated feedback loops are helpful here. Making sure all stakeholders (especially those higher up) have weighed in before moving to the next phase is vital—and especially critical before Production starts.

Up to now, the designer has been very involved in the iterative, collaborative, creative conceptual process. While they certainly don’t disappear, from the client’s perspective they will see less of the designer and more of the project manager, who delivers the work now that less designer interaction is needed.

At Tremendousness, we use the term “designer” in a few different ways. In this case, the designer is the creative person that participates in Discovery, concepts Napkins, writes text, and sketches and lays out the Blueprint. While a Blueprint isn’t the final design, it’s the basis for what gets illustrated and is a core part of the design process. In the blueprint, the visuals are usually hand-drawn sketches or some other “rougher” and more quickly iterated kind of drawing. Text should be pretty well determined, especially since it works so closely with the visuals. In the Production phase, an illustrator draws every little thing to pixel-perfect precision.

The designer of the blueprint or storyboard or PPT should personally do a handoff with the illustrator so they can convey important client peeves or preferences, or project revision history. It’s also often easier to share little details and FYIs by discussing in person, or at least via virtual meeting. Sometimes, there are existing assets the designer can point the illustrator to so they don’t have to redraw visuals that already exist. 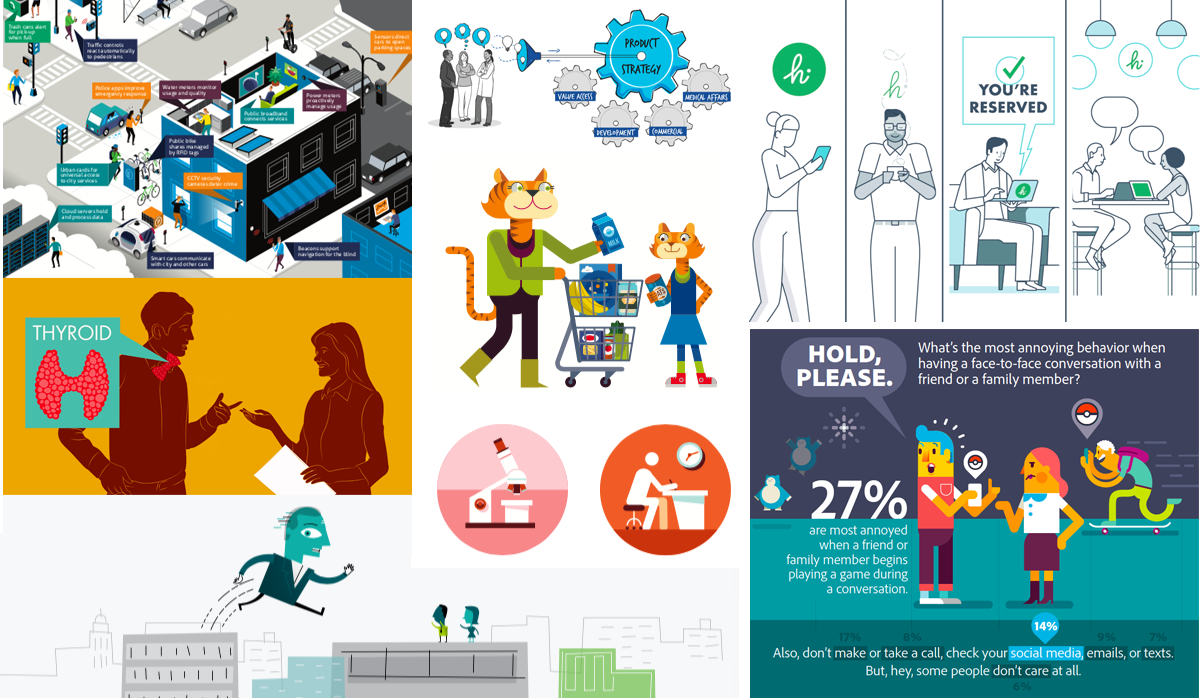 Style options range from realistic to cartoony, from vintage to high-tech. Anything is possible—we don’t have a singular “house style”.

Essentially, this is how it looks. This is based on a selected design style, or the look and feel of illustration. Maybe it’s very clean and modern. Maybe it’s hand-drawn and cartoony. Maybe it’s rich and organic. Maybe it’s got a vintage feel and maybe it’s quite futuristic. The illustration can and should be whatever is right. Anthropomorphic animals? Sure. Restroom people icons? Yes.

But all of this depends on a combination of brand considerations, client preferences, previous work, audience taste, and budget. In some cases this is determined at the very beginning of the project. It also can be worked out during the Concept phase. Whatever the case, it absolutely can’t wait until the Production phase to be decided.

The actual drawing and designing

For infographics, the illustrator typically fires up Adobe Illustrator and places the Blueprint on a layer, so they can easily refer to it or trace it, as they draw the final artwork. They’ll also be grabbing the text boxes from the Blueprint. Some illustration styles might get drawn with a stylus on a tablet rather than clicked out via mouse. The illustrator also will load or create color swatches and do research on the style if it’s been used in the past.

For video art, it’s critical that the storyboard created during the Concept phase show all key scenes and include detailed descriptions about how they build or develop, as well as how they sync with the narration. The artist needs to know this stuff so they can draw all the elements an animator needs to bring the artwork to life. For multi-page publications, we use Adobe InDesign. For presentations, we use either Apple Keynote, Microsoft Office, or Google Slides depending on client preference. But because nearly everything we do is so visual, someone, at some point, will draw things in Adobe Illustrator to be placed into layouts in other apps.

Some clients don’t have a preference and look to us to pair fonts with our designs and artwork. Others, especially the bigger companies, have brand guidelines that are adhered to with varying strictness, based on client preference. Sometimes we’ll need to purchase font licenses to be able to stay on brand. Other times, especially with common fonts, we already own it—or it’s available for usage via Google Fonts or Adobe Fonts.

Typography is a design discipline unto itself. Some designers get really into kerning to perfection. Others just type out or copy/paste the words and focus on the overall gestalt of the layout. Honestly, we fall somewhere in-between. We pay attention to bad letterspacing and fix it, but generally our designs are complex and detailed and no headlines are so fancy or dominant that detailed kerning is required.

It used to be that nearly everything a designer did ended up printed, but that’s much less common now. For those projects that require printing there are extra steps you must take. Here are the basics: You need bids from qualified printers. Everything should be CMYK color. You usually need crop marks and other printer’s marks in the files. There will be a digital and/or hard copy proof that needs reviewed and sent back to the printer with approval—and sometimes even an on-site press check. Printing adds time to the project. And that’s just the tip of the iceberg.

Some infographics or publications have interactive elements built into the PDF or PPT (and some are native interactive and are published to the Web in other formats). Both of these scenarios feature wildly different issues to deal with regarding platform and browser compatibility, usability, and developer collaboration—too many technical things to even get into here. The important thing is that interactive elements work as they were intended, or fail gracefully and invisibly without impacting the user’s comprehension of the story.

These are just a few of the things that happen in the Production phase. Check back next week for part 2, in which we look at video projects and the final stages of Production.

This post’s feature art was adapted from a project we did with Alain de Botton for The School of Life.