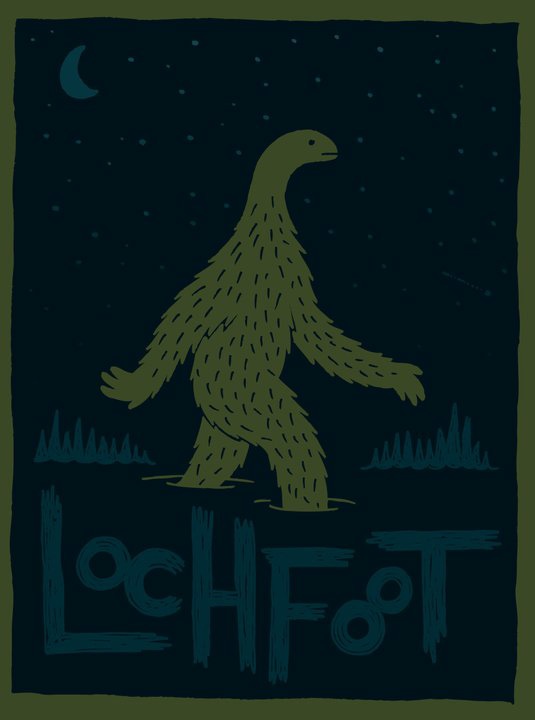 In August of 2010 I was hanging out with my youngest son Zach when he showed me a Google image of Bigfoot riding the Loch Ness Monster. He’s always loved cryptids—popular creatures whose existence has never been proven—and he thought this image was hilarious. The original poster created for my son and posted on Facebook.In August of 2010 I was hanging out with my youngest son Zach when he showed me a Google image of Bigfoot riding the Loch Ness Monster. He’s always loved cryptids—popular creatures whose existence has never been proven—and he thought this image was hilarious.

I created a Lochfoot poster for Zach and posted it to Facebook. I didn’t think about it deeply. I just sketched it up on my Cintiq tablet and put it out there. A one note joke that people might enjoy as much as my son. That was that. Or was it?

My friend Kevin—who is a great illustrator and whose opinion means a lot to me—liked it a lot and thought I should push the idea further by turning it into a book. What? A whole book? I didn’t think that there was enough of an idea there but he talked me into it.

Creating animated explanation videos for many years at XPLANE had given me some experience with story structure, so I sat down one Friday night to think it through. Who is Lochfoot? Where does he live? What does he care about?

The breakthrough came when it dawned on me that Lochfoot didn’t have to be an adult. He could be a teenage boy.  Not a scary monster to be feared but a sensitive young kid who just happens to look the way he does. He might live in seclusion with his Dad and want nothing more that to have a few friends to hang out with. I looked at the possibilities through the eyes of my 12-year-old son Mitchell.

The outline came pretty quickly… then for whatever reason I left it untouched for a year. I guess I kept trying to carve out big windows of time to work on it that never came. Kevin kept prodding me and now my sons were pushing me too.

“Come on Dad what’s up with Lochfoot?”

My next step was to create the storyboard and my initial Lochfoot thumbnails called for about 39 pages. I went to the bookstore to see what was average for a picture book. Where the Wild Things Are and Polar Express had maybe half that. So I started editing and got the story to about 30 pages of illustration.

And then another year passed after that. :/

I finished all the illustrations, tightened the story and combined some of the pages. I wasn’t too worried about the page count because I had always wanted this to be created for the iPad. I was inspired by the iPad books for The Fantastic Flying Books of Mr. Morris Lessmore and A Charlie Brown Christmas. Print books are great but narration, music and sound effects add such nice atmosphere to a story. Unfortunately making this for the iPad would mean a lot more work and delay in getting it out there but it seemed worth it.

I’m very lucky I had James Macanufo to help me bring this creature to life. He’s created a couple great apps already, including Choo Choo Time for little kids and Double Dopple for slightly older kids. He’d been wanting to make a book as a learning experience and introduced me to the world of CocosBuilder. It’s like a cross between Macromedia Director and Keynote with a little JavaScript thrown in. It was time intensive to say the least. Every page had to be broken down into moveable elements and each element had to be saved out for 1024 and 2048 resolution.

Bringing the narration and character voices to life was mostly a family affair—but with one snag. I thought my older son Mitchell should play Lochfoot because his voice had the right quality. Zach was not happy when I told him. After all, Lochfoot came about because of him and of course he’d want to play the creature! Time passed, cooler heads prevailed and Zach understood. My wife Diana narrated, Zach plays Zach, and Mitchell plays Lochfoot. With only one girl part and two nieces, I named the girl after my niece Madison but let my other niece Meredith do the voice. I played the Dad. We recorded at Clayton Studios near our house and had a blast. Friends provided some other voices and all that was left was finding music and sound effects.

So here we are. More than three years have passed since that first poster was created and Lochfoot the iPad book has just gone live on iTunes. Versions for mobile phones and Android will be coming soon. I have no idea what to expect. I’m just glad we saw it all the way through and had some fun doing it. Hopefully the book will inspire a few more monsters along the way.

You can find Lochfoot on the Apple iTunes Store here, and above is the trailer video.