Tonight is the opening of the 8th annual Famous Fictional exhibit at Mad Art, organized by Dan Zettwoch (with great help this year from Ron Weaver). Three of us Tremendos have pieces in the show and we’d love to see you there!

The theme this year was “From the Womb to the Tomb.” Basically, come up with a way to represent a fictional character as both young and old. Here’s a teaser. We’ll post more images from the show later. 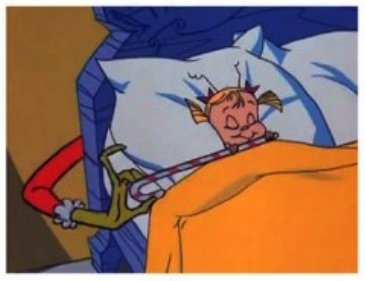 A scene from “The Grinch.”

I’ve always been a huge fan of animation cell art. I used to collect them a bit in the 90’s. I have a few from Bill Plympton’s “25 Ways to Quit Smoking,” one from “A Charlie Brown Thanksgiving,” and one from “How the Grinch Stole Christmas.” It’s the shot of him carving the roast beast. An added bonus is that each painted animation cell comes with the drawing that the animator followed.

My Grinch cell was the inspiration for the two pieces that I did for this year’s show. I knew showing the Grinch as a kid would be fun. The question was whether or not I should make him cranky, like he is as an adult—as you know, he hates all the “noise, noise, noise, noise.” I opted for a loud four-year-old version who would represent the opposite of his elder self. I also remembered a Simpsons episode where little Bart is walking around the house banging on pots saying “I am so great, I am so great.”

For the instruments, I simply pulled reference of the Whoville people’s Christmas and turned little Grinch into a one kid band. I closed his eyes to reflect a happy peacefulness. It’s the same expression he has on my animation cell.

As for Cindy Lou Who, I could have gone with her standing by the Christmas ornament, but instead went for the image that usually comes to my mind which is of her laying in bed clutching a candy cane. For accuracy, I grabbed a still from the cartoon and used that as the foundation of my art. I put a nightstand by her bed and then filled it—and the area in front of her—with the things you might expect to see around an elderly grandmother. She’s of course asleep and still clutching the candy cane. I couldn’t bring myself to make her super old looking in a negative way. I opted for little touches here and there with the hope that her cuteness would still show through.

Initially these were only going to be simple pencil drawings, but I decided to color in the Grinch’s greenness so it would be obvious who he is, then I colored in Cindy Lou as well. I considered doing these in India ink but decided to go with my initial idea of pencil drawings—though they are touched up a bit with a flair pen, so the darker line would stand up next to colored areas. In general, pencil drawings just feel more special and I tend to like them more than the finished cells.

Bill Keaggy’s “So Many Adventures” 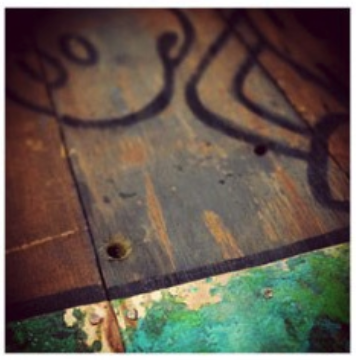 Detail of the older portion.

I decided I wanted to be a designer when I was in high school. My friends and I started a self-published ‘zine about BMX, skateboarding, and music and I named it Bullwinkle, after one of my favorite shows. We changed the name for the next issue, but Bullwinkle has always stuck with me. It’s stupid yet profound, artful but messy, and great for both kids and adults. I love everything about the original show, and my kids think I do pretty good Bullwinkle impression.

That said, it took me a while to figure out what I wanted to do for my piece. I tore through and tore up several ideas before settling on aging the art itself, rather than just the characters. So on one side we have Rocky and Bullwinkle in 1949, 10 years before the show debuted, young and carefree. On the other, the present day—the real world in which moose tend to outlive squirrels.

I’ve been making an effort this year to make more “things” rather than online, digital, or photographic projects, so this was a lot if fun to work on because it involved wood and metal and sawing and staining and paint and copper and solvents and nails and staples… 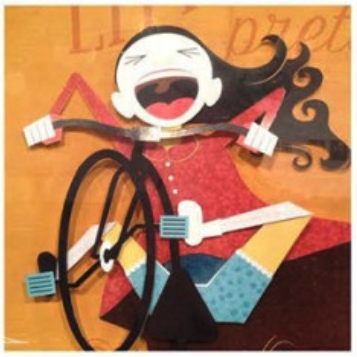 Detail of the younger portion.

My approach to the Famous Fictional show is always trying to integrate my concept with something that I want on my walls at home. This can make it a bit more challenging, because while there are lots of creative and funny and inspirational pieces for each year—not all of them are something I’d want staring me back day after day in my own home.

And a typical go-to subject in our house is… BIKES! What fictional characters ride bikes? Well, I couldn’t attempt Pee-wee Herman after Mr. Zettwoch’s amazing bike from an Art Crank show a few years ago. So, yeah. The Wicked Witch from “The Wizard of Oz.” Her image of pedaling pre-tornado is iconic—especially if you’ve ever attempted the Pink Floyd synch. But she’s so crotchety!

So my intention was to create and envision a young girl, un-soured by life. This toddler version of her was adventurous! And I tried to be a bit ambiguous with her expression. Is that open-mouthed, air-catching hellion elated or scared? I honestly don’t know. But I suspect she’s having fun. At least until she lands.

Isn’t that how it always goes?