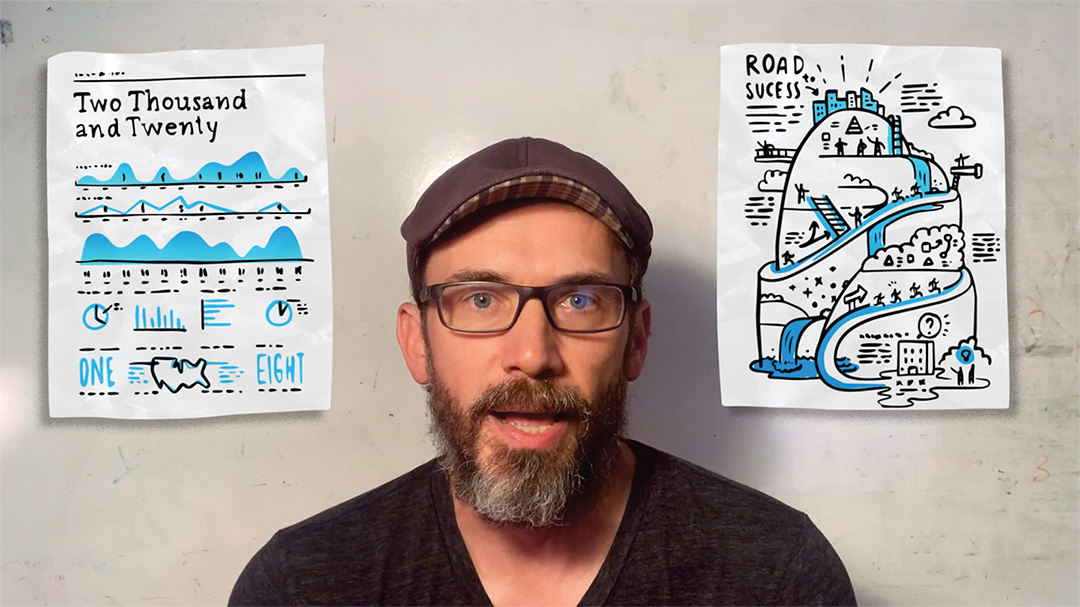 A new explanation video: What is information design?

tl;dr — I piggybacked on a crisis, uncovering an opportunity… and we ended up with a cool new video. Scroll down to skip the backstory and watch the video.

In February 2020 I wrote a short blog post that attempted to encapsulate and explain the concept of “information design” in a way that anyone could understand. It wasn’t meant to be academic. I just wanted to use everyday words and real-world examples.

It had absolutely nothing to do with a project for which I was to travel to California in March to work on location for a video shoot. We were in the process of writing scripts that executives would deliver to their biotech company. It was about change, and some graphics would be added in post-production to emphasize key points as the executives spoke in various locations around the company’s beautiful and permanently sunny campus.

Well, just a week or so before shoot time… the pandemic hit. All travel was cancelled, both the client and Tremendousness started working from home, and we began to try to figure out how they could still make these videos happen. The client’s big change initiative was well underway, and it still needed introduced to their employees.

We came up with several alternate approaches, but the one that resonated with the client was (in theory) the most simple: talking heads with explanatory art and animations coming in around them. Working from their home offices, we’d have them use their smartphones or laptops to film themselves.

But… in reality the approach required a teleprompter app, tripods, lighting, mics, and instructions. So… so much for it being simple (we now record virtual meetings to make at least some of this easier). But back then, we set about figuring out the best way to help these very busy senior leaders do most of this on their own. The timeline extended and the project went into the summer months. We tested apps and equipment. We wrote instructions, took screenshots, and drew helpful diagrams. Ultimately, I knew I had to film myself using the same equipment and instructions just to test how everything worked—and pulling it all together it was a lot of work.

I figured that I shouldn’t waste this opportunity to create something for Tremendousness, and I turned that old blog post into a short video script. I did two takes on my iPhone in front of my well-worn whiteboard, and, yeah, by that time the lockdown beard really needed a trim. We got things ironed out and working, and while the project was still rather difficult to execute, that pre-work helped a lot. We eventually decided that the self-filmed / talking head / Zoom call look and feel had what you could call, “COVID Charm”. Of course it wouldn’t be as high quality as having a professional crew on location, but it got the job done under very difficult circumstances. Perfect video and audio quality was not the goal, communication was. Besides, with everyone working from home for the past several months, employees became very used to seeing their leaders and colleagues speaking from a little rectangle on their laptop. The client team were champs setting everything up on their own and recording themselves, with only remote assistance. We finished the project. It led to more work and helped better define a specific kind of deliverable we could offer.

Later that year, I storyboarded my video. It took a while, but we finally got around to illustrating (Chris is a tremendous artist!) and animating (Darrick is a tremendous animator!) it this year. I hope this approach becomes a series so other Tremendo’s can share their varied knowledge in a fast and fun format. Would I have turned an old blog post into a super cool new video if that client project hadn’t been nearly derailed? Who knows. But that’s what happened, and all of this is simply to introduce our new “What is information design?” video and make a point: some setbacks are opportunities in disguise.

Here’s episode #1 of Two minutes of Tremendousness. This first one tackles the question, “What is information design?”